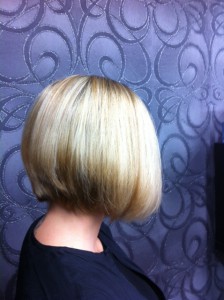 New client Nina called us with a real challenge, six hours in another salon had taken her previously soft blonde highlighted hair into a realm of hair despair! Caustic bleaches applied directly to her scalp and roots not only inflamed her scalp but produced a terrible orange/yellow colour in the roots that they seemed happy to attempt to send her out with. She dug her heels in and demanded that they do something to fix the terrible colour they had somehow created. Several failed attempts at toning left her feeling defeated and she just finally insisted they colour the roots a darker brown to cover their mess and minimise the embarrassment she would feel once she was back on the street. To add insult to injury they charged her for their ineptitude! Two days later and Nina is now in Gold having her hair highlighted to remove the darkness and orange from the roots and toned to created a cleaner, creamier blonde. To say she was happy with the results would be somewhat of an understatement! Gold Salon, Tokyo’s Leading Hair Colour Correction Specialist Salon.